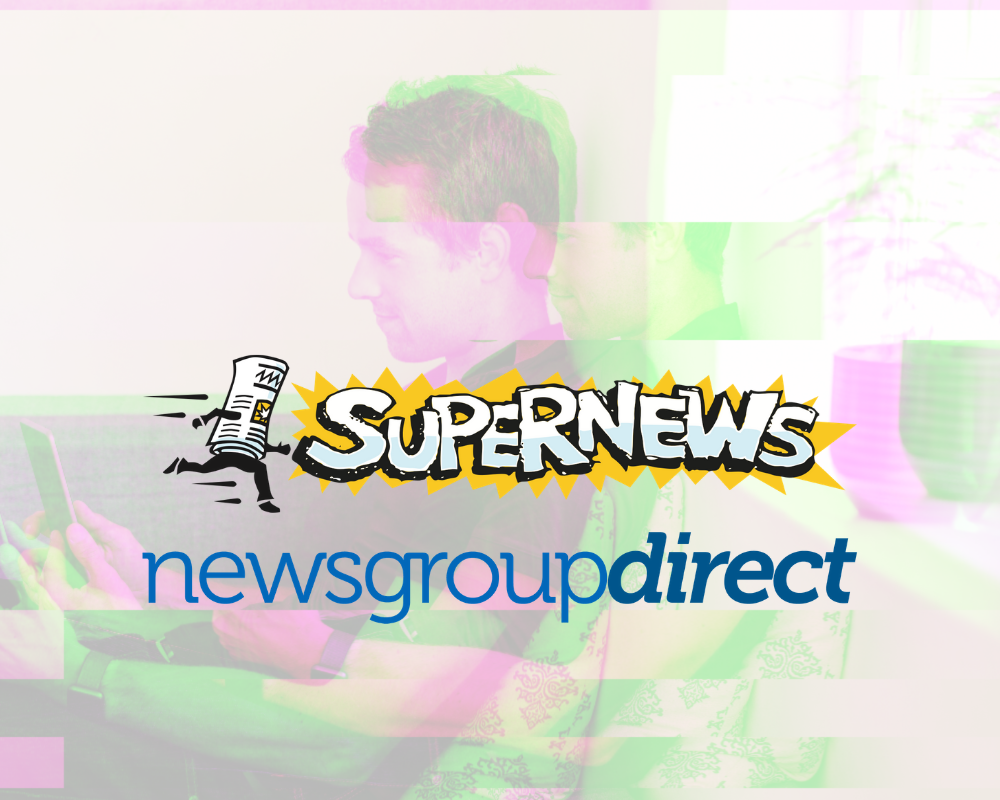 It’s a big day here at NGD HQ! We’re excited to announce a partnership with the great folks at Supernews. Starting today, NewsgroupDirect customers will be able to upgrade to plans that offer USENET service at BOTH NewsgroupDirect and Supernews. That’s right… you’ll get access to TWO different USENET backbones with your NGD account.

You can upgrade to our new Super Unlimited plan for $7/month. It includes everything in our standard NGD Unlimited plan plus access to the Supernews servers. We’ll be releasing additional plans with Supernews access in the near future, so stay tuned for that.

Supernews has been around since 2004 (just like us!) and is known for their quality service, excellent retention, and great speeds.

If you have any questions about Supernews or want to upgrade, feel free to reach out to our support team at [email protected] and we’ll get back to you in no time.

Our Black Friday deals will go live at 8AM ET on November 27, 2020. Here’s what we have in store for you this year:

Special bonus! If you buy an unlimited account and pay with Bitpay then we’ll add an additional 50% of your term for free. So the 10 month payment would get you an additional 5 months. The extension will be added manually.

As always, our we are price matching other provider usenet deals. 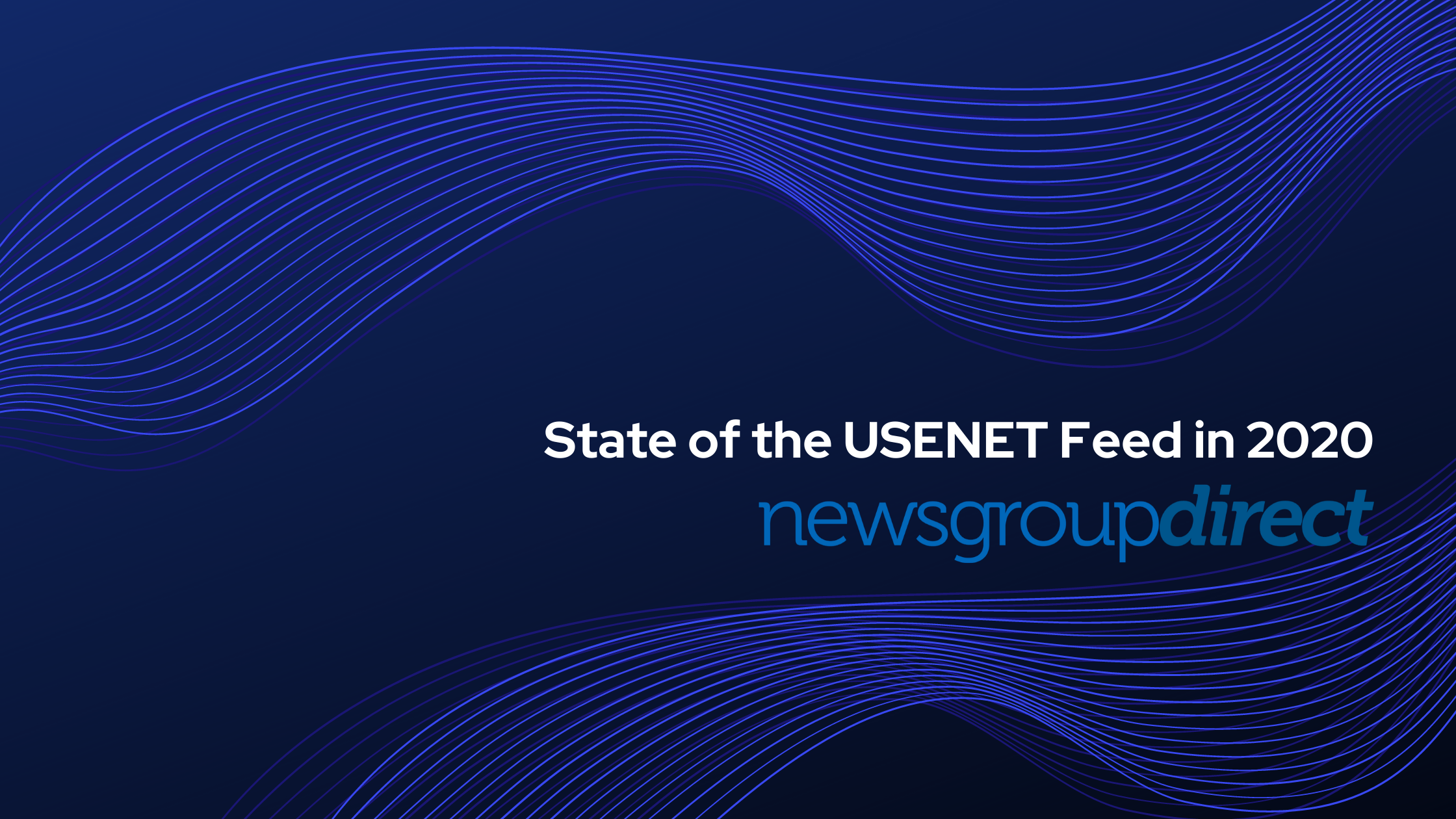 If you’re a USENET user then there’s a good chance that you love data too. The growth of the USENET feed over the last decade is very interesting and shows all sorts of changes in user behavior, the quality of our internet connections, and much more.

The approximate volume of USENET data generated in 2008 was 4.7 TB per day, which was a staggering amount at the time. The USENET feed has grown around 25% yearly since 2008 and now sits at around 120 TB per day, a 5X increase. Another way to look at this… 2020 alone accounts for nearly 30% of the total USENET data since 2008, and we’re not half-way through the year. 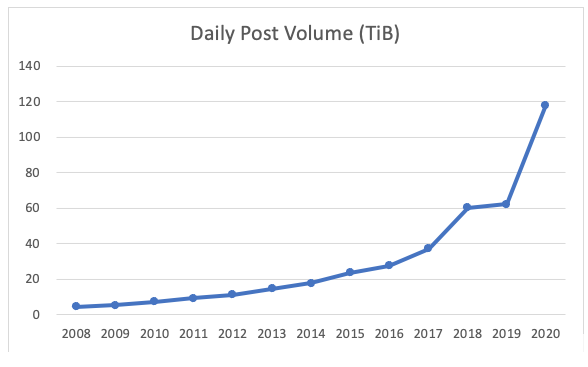 Just like most things digital, USENET newsgroups have grown substantially and quickly. What once took a year to achieve is now a bi-weekly milestone. Since 2008, online users have increased by more than 1,157 times with an estimated 4.79 billion people spending an average of 6.5 hours online every day.

One potential explanation for the growth of the USENET feed is reposting. Older articles are increasingly being reposted, which pushes more of the total USENET feed into the more recent days.

It’s estimated that only 10% of articles posted are ever actually read and more than 50% of the articles read are less than 120 days old and a whopping 85% of the read articles are less than 1500 days old. Combine that with reposting and the growth of the USENET feed makes more sense. Older articles are just not pulled as often.

Retention is a Poor Metric

Since older articles no longer carry the weight that they used to it doesn’t make sense to hold up binary retention as the most important metric in Usenet anymore. The vast majority of read articles are from within the last 12 months or so, and that’s where our focus is and where we have put our primary resources into technology to deliver those articles as fast as possible. NGD’s primary goal is to make sure that our users have the fastest access to the articles they need.  We show less than 1.5% of all requested articles are unavailable, and those are typically par2 files.  This number includes all message failures including articles outside our retention as well as articles that have been deleted or removed.

Due to a number of factors, especially those that have been created through our worldwide pandemic, it’s too soon to say what the daily volume total could be for 2021. As of now though, the forecast for it should only see a positive increase in these numbers. 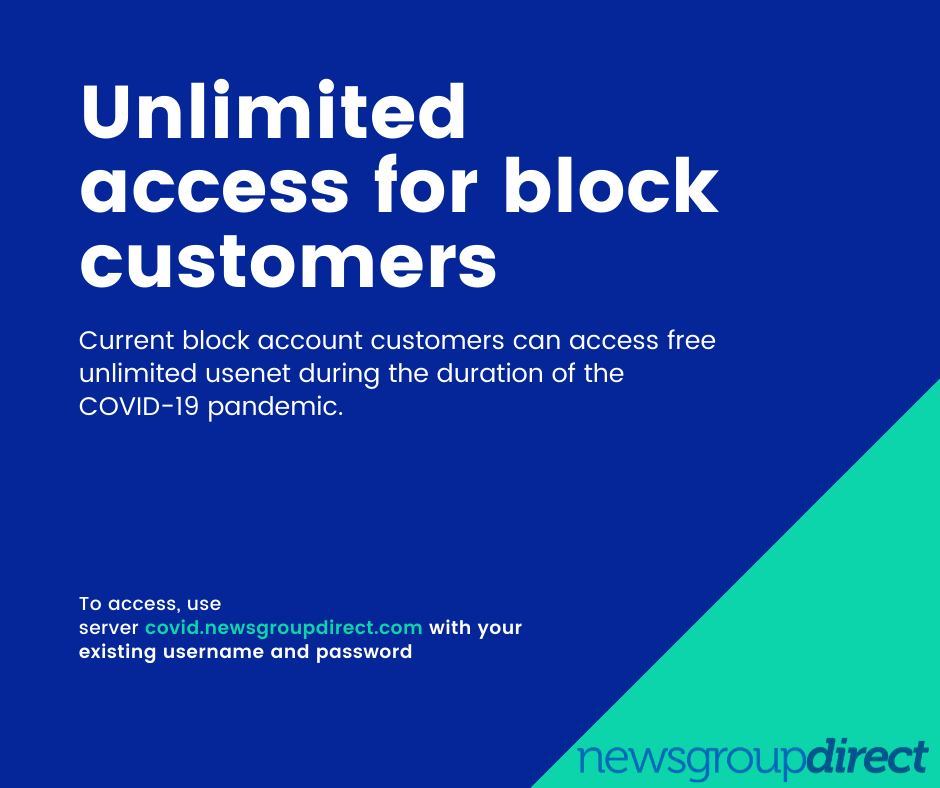 Update: This program has ended. Thanks for your participation!

Who is This For?

Our free access is available for all NGD block customers (current customers and new customers). Unlimited customers should continue to use the existing servers.

How Long Will This Last?

We’re not sure. We’re planning on at least 2 months from today (April 17). We’ll re-evaluate then.

The only thing you’ll have to change in your configuration is your NNTP address. You’ll need to connect to covid.newsgroupdirect.com with your existing username and password. Everything else will stay the same.

Contact [email protected] if you run into any issues.

Our sister site, Newsdemon, is celebrating their 15th anniversary with a whole host of usenet deals. We’re price matching every one of those deals on our Usenet Deals page.

The first batch of price-matched deals is up right now, including:

We continuously update the Usenet Deals page as competitors release new pricing, so check back often to see what’s new.

Black Friday is upon us once again, and we’re ready!

Our Black Friday deals go live at 9AM EST on November 22 and will run until we reach our predetermined allotment for each deal.

Here’s a rundown of what you can expect to see:

You can find all of the deals on our Black Friday page.

Want To Know About Future Promotions?

Happy Holidays from the team at NewsgroupDirect!

For over a decade NewsgroupDirect has provided the best usenet access in the world. Now, we’re making it even better. Our unlimited usenet plan is available in 3 tasty flavors, at our best prices ever.

Our new pricing for unlimited usenet is as follows:

As always, our unlimited plans come with the best features.

Feel free to reach out to [email protected] if you have any questions or need assistance with your NGD account. 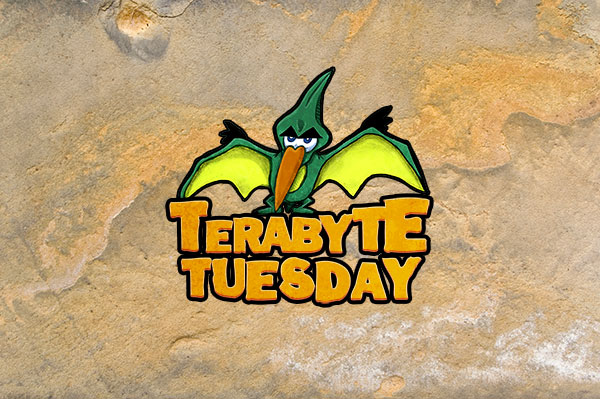 You can purchase here => Terabyte Tuesday

Why Choose NGD for Your Usenet Blocks?

NewsgroupDirect blocks include access to all of our best features, including:

Want To Know About Future Promotions?

Join one (or both) of our mailing lists, depending on your interests. We respect your privacy… so no spam, ever.

Join our Happy Hour mailing list if you want to be notified about our lightning sales, where we offer a deep discount for a couple of hours, 3-4 times per month.

The sale runs from 12 AM EDT on April 25 until 11:59 PM EST on April 27. No sale prices will be honored after the sale expires. The sale price is available to both new and existing customers. Sale only applies to 1 Terabyte accounts. You are free to purchase multiple 1 TB blocks if you choose. 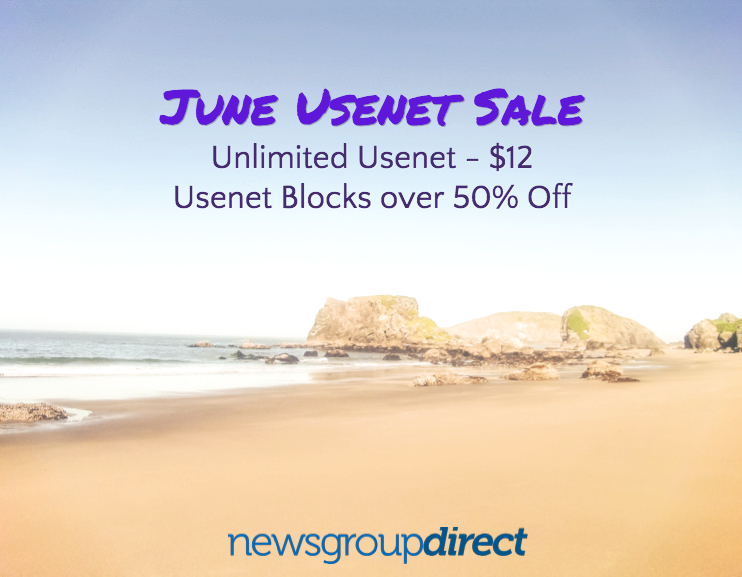